'I Tell Stories with my Images.' - Till Mayer about his Mission as a Photographer

Interview with social and war photographer, journalist Till Mayer, who is now reporting from crisis areas in Ukraine.

Till Mayer is a freelance war photographer, journalist, and just a nice Bavarian from Bamberg. He is now reporting from Ukraine's war areas and takes photographs there. We were lucky to have a conversation with him and to have an opportunity to pose some questions to him.

Khrystyna: Hello Till! Nice that you have found the time to answer some of our questions. Please tell us about your latest photo project!

Till: At the moment, I am working as a reporter in the crisis areas in Ukraine. I have been to the suburbs of Kyiv and Zhytomyr for three weeks recently, and to Lviv and Ternopil because I still have many good friends there. I worked there as a correspondent for several newspapers and took pictures. Khrystyna: Respect, this is very brave of you, especially because these areas were heavily shelled at that time.

Till: I don't think I'm brave. I think the people there are incredibly courageous.

Khrystyna: I know that you worked in Donbas as a photographer and journalist in 2017.

Till: Yes, but I was there not only in 2017. I also went a dozen times in the following years to the front line trenches and the people living in the so-called "grey zone." The war in the middle of Europe got forgotten. That was shameful for us Europeans and also dangerous for our peace. When the issue is no longer present in the media, people think there is no longer a problem. That was fatally wrong. In 2017 I decided to cover this war as a long-term project. Now I continue after the large-scale invasion started.

Khrystyna: What other countries have you been to as a journalist and photographer?

Till: I have been to Ethiopia, Iraq, and many more. First of all, in war hot spots. I reported from more than 30 countries torn by war and crisis.

Khrystyna: What or who inspired you to start your photography career?

Till: I discovered my love for photography when I saw a photo by Sebastião Salgado as a school boy. And also the works of photographers in the magazine GEO. They impressed me very much. Salgado's images were mainly black and white, and they were beautiful. The colors are sometimes distracting, I think.

"Salgado's images were mainly black and white, and they were beautiful. The colors are sometimes distracting, I think."

In my teenage years, I was already working as an intern for a newspaper. At first, I didn't manage to make something cool, but I learned a lot from my older colleagues when we went on the trips. However, it took me a while to find my style. 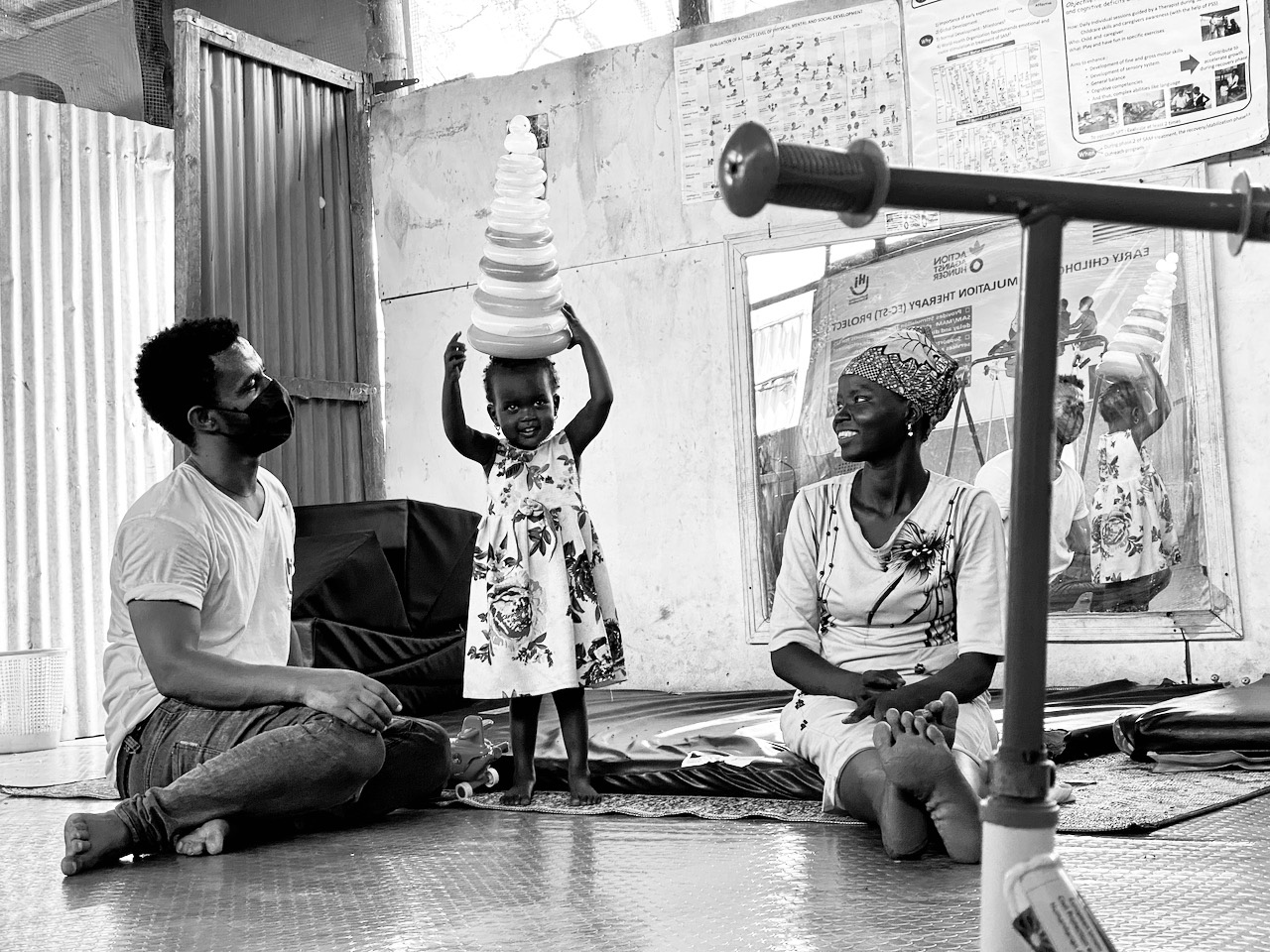 Ethiopia. Employees help children recover from the effects of severe malnutrition. ( 2021 Till Mayer )

Khrystyna: Do you work in collaboration with other creative people?

Till: Yes, I have many talented colleagues here in Germany who inspire me a lot. Otherwise, I usually contact the local photographers when I go abroad and take photographs there. They always see things in an interesting way that differs from mine and they are usually right because they know the area and the culture better than I do. So, many photo projects I have done with the help of local creative people. For example in Ukraine, I often travel, especially these days with a good friend Oles.

I have also made short docus with good friends of mine: Pirmin and Maike Styrnol, Hendrik Steffens and Dustin Hemmerlein. These are "Für ein Lächeln" (For a smile) and "Winter in Lviv". With the Winter in Lviv fundraising campaign, we collected over 130,000 euros as donations for the Medical Center in Lviv, which supports the elderly and people in need.

Khrystyna: I'm sure there are things in your profession that might discourage you sometimes. What are they?

Till: Sure, for example, it's not encouraging that some people might say they could easily take a picture like mine just with their cell phone. But I know how much effort is behind a single image. Furthermore, I've invested about five thousand euros in equipment this year alone.

Khrystyna: Tell me please, have you ever dealt with such an issue as copyright infringement before?

Till: Yes, but it is challenging in my case to track the images. I cooperate in many cases with NGOs. For example, they cover my travel expenses. Therefore they have the right to use some of my pictures in media or for their purposes for free. My goal is to let as many people as possible see my photographs and, in this way, be witnesses to specific events. I take pictures not only to earn money. I am trying to tell stories with my images.

"I take pictures not only to earn money. I am trying to tell   stories with my images."

Khrystyna: I see, but have you ever noticed a clear copyright violation of your images?

Till: Yes, actually, I have experienced that before. A magazine from Serbia has used my picture with my whole article on its website. My acquaintances told me about it.  But what should I have done in this case if I don't speak Serbian? Besides that, I am not aware of the Copyright regulations in Serbia. I think they would simply ignore my e-mail.

Till: I would advise them not to be afraid of working on long-time projects. Many photographers try to avoid it, but it could become a big part of your life and be extremely enriching.

Khrystyna: Thank you Till for sharing your thoughts with us. We really appreciate it. I think many photographers will get inspired by your path!

Unfortunately, the amount of work a  photographer puts into the creation of a single image is often underestimated. Taking fascinating pictures usually costs photographers a lot of time, effort, and investment in their equipment and education. Some of them even have to take risks to pursue their passion, as our respondent Till Mayer does. At the same time, images on the Internet are increasingly being used without a proper license. Only a few photographers know how to deal with such violations. Our mission is to provide professional support to creative people and help them enforce their Copyright. That is what we strive for with Fair Licensing.

What is Image Theft and how to deal with It?

Meet Fair Licensing at the international CEPIC Congress 2022 in Mallorca

We are honoured to be a participant and a sponsor of the annual CEPIC conference this spring.

This article presents information about NFT technology and the perspectives it gives to Photographers, as well as important measures to avoid...

Be first to know about the actual information on Image Copyright, Licensing and Image Search topics.